During the Barilla Pasta World Championship 2018, 18 young chefs from all around the world will participate in “Mastery Challenges” in order to put their cooking skills to the test and create signature dishes that embody this year’s global culinary theme: Eat positive.

After the final round of the “Mastery Challenges”, one of these 18 talented chefs will be named the Barilla Pasta World Champion 2018.

The event will take place in Milan at La Pelota on 24-25 October, in occasion of World Pasta Day. Stay updated by following the hashtag #PastaWorldChampionship. 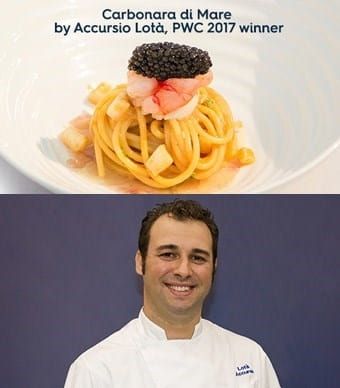 Eating has always been a source of pleasure. Add the secret ingredient, pasta, and you get a world of joy and healthy living. Eat Positive means to find pleasure in good company and good food, like pasta, the greatest ingredient of life. Barilla gives you the ingredients to eat positive. Transforming the best of nature into something healthy and delicious.

Born in Tokyo, he’s the chef-owner of the reputed “Villa Della Pace”, a western-cuisine style restaurant in the Noto peninsula. Fascinated by the local wild nature and culinary culture, his cuisine is a combination of Italian cuisine and local farmers’ products.

Originally from southern Italy, he embraced a new carrier in Dubai in 2013 by joining gourmet restaurants like Conrad hotel and Antonio Marras. Now he is the Chef de cuisine of a disruptive concept restaurant, Cocoa kitchen.

He defines himself as a Polish and Mediterranean cuisine lover. This year, he won the special Best pasta course in the thirteenth edition of the local Italian Culinary Art competition.

Despite being very young, he has a broad experience within the restaurant business as a baker, à la carte chef and chef at sea.

After several experiences in starred restaurants around the world from Switzerland, Norway and US, he settled down in Rhodes as a Head Chef of the gourmet “Noble”. In 2016, he was prized by Joan Roca as the best European Young Chef.

Born in Italy, he soon enjoyed working at the best restaurants in his homeland before continuing on to new adventures in London and Sydney.

His long experience in Michelin-starred restaurants in Europe and Singapore has brought him to forge his culinary talent in international cuisine.

A passionate chef of international and Italian cuisine, he’s now Chef at La Castel restaurant in Iasi. He won different culinary prizes, thanks to his art of cooking pasta.

His carrier is marked by important prizes: after winning 4th in the “Bocuse d’Or Brazil” competition and becoming a nominee as the Best New Chef by a famous local magazine, he has secretly won the Michelin Bib Gourmand as Head Chef of the Piccolo restaurant in Sao Paulo.

Her twofold Spanish and Italian roots brought her to a remarkable professional experience in notorious restaurants throughout the two countries. She is now at the starred restaurant,“The Cook”, in Genova.

A young and passionate Norwegian Chef, he took part in the qualifying round for Bocuse d’Or. He’s now working in Oslo at the one-Michelin-starred restaurant, Statholdergaarden.

She cooked under Alessandro Boglione at a one-Michelin-star restaurant in Piedmont, Italy.

Since she appreciates the art behind creating a culinary experience, she naturally joined the “Terzo Piano” restaurant at the Art Institute of Chicago.

Specialized in French cuisine, he works at Parlè restaurant in Istanbul, a modern interpretation of the Brasserie concept.

As an Executive Chef on board of Costa Cruises (Carnival Group), he’s challenged daily to make people experience a pleasurable time at the table with high quality and sustainable Italian food all around the world.

After a long experience in different 5-star hotel restaurants in Beijing, he’s now Executive Sous-Chef for Hilton Wangfujing. Disciplined and creative in the kitchen, passionate for Italian and French cuisine, he proved to be a two-time finalist of the locally renowned “New Western Cuisine Competition”.

Starting his career as a restaurant manager, she changed her professional path to become a chef. Since 2011, Sabrina has managed her own restaurant and catering business.

He professionally grew up beside talented Starred Chefs until accepting the challenge to become the Chef de Cuisine of “Café Terroir” in Lyon, a unique concept restaurant devoted to promoting authentic regional cuisine with respect of the finest local ingredients.

A Michelin-starred chef from Liguria hiding his revolutionary gastronomy spirit under a reputation of “past time” elegance: against appearances and ephemeral trends, he likes experimenting with techniques and culinary art in his “Lume” restaurant, while staying true to the ancient values of the Italian Cuisine.

Cooking is for her a life symbol that requires passion and humility. Born in Salerno, in the south of Italy, she was inspired by her family fish restaurant before being chosen as the best female chef by several Italian guides. At just 25 years old, she opened her first restaurant, bringing her Mediterranean roots to northern Italy before setting up her reputed starred Restaurant, “Alice”, in Milano. Her mantra? “Creativity is thinking outside the box. Madness is the means of achieving it.”

At just 25 years old, he was the youngest Michelin-starred chef owner in Italy. A few years later, his creative, instinctive “cuisine”, drawn on influences from around the world, thanks to his past experience in some of the best restaurants in Sydney, London, Tokyo, and Spain, has led him to cement his place among the Italian culinary elite.

Brought the concept of “cucina pop”, a type of cooking that relies on perfectly balanced contrasts, to the Italian cuisine. These contrasts can be seen in his restaurant “D’O” near Milan.

His 150 year German chef family injected in his blood his passion for cooking and naturally drove him to be prized with a Michelin star at the age of 23. Eclectic and disruptive in his culinary style, as well as passionate about nutrition and sport, he was the national soccer team chef for 10 years.

A photographer and artist from San Diego. She sees food as an art, an opportunity to do something creative, and a way to experiment with flavors.