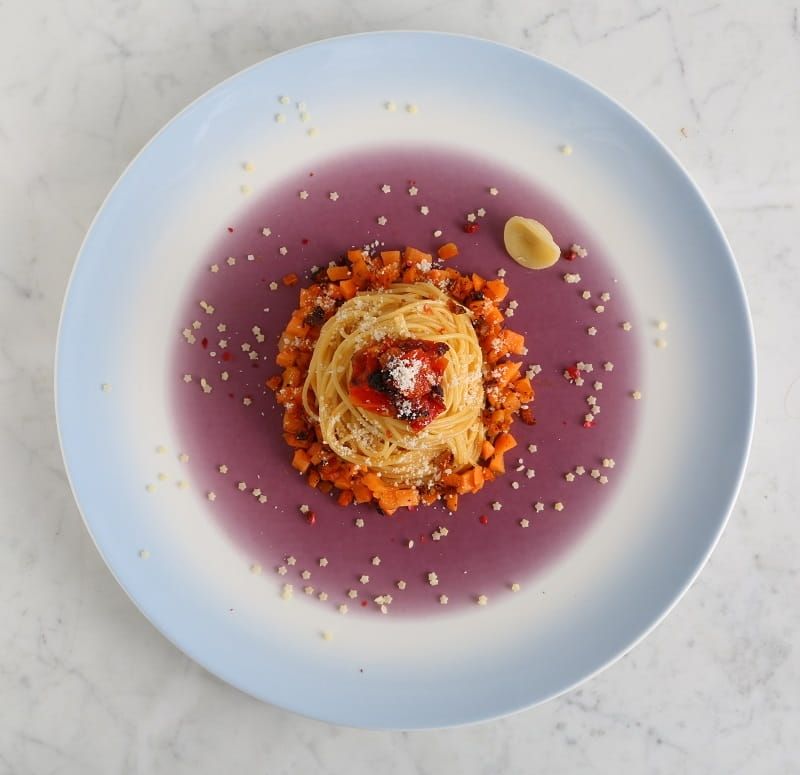 October is National Pasta Month and October 25 is World Pasta Day, so it seems fitting that scientists recently discovered the strongest material in the universe—nuclear pasta, an exotic substance that exists in ultra-dense dead stars called neutron stars.

According to an article in Newsweek, "Neutron stars form when the core of a massive star collapses under the weight of its own gravity. What emerges is a star that has around double the mass of the Sun crammed into a 20km-wide sphere... Because of the immense gravity, the outer layers of neutron stars freeze solid to form a crust that surrounds a liquid core. Below the crust, protons and neutrons compete and end up forming long cylindrical shapes or flat planes. These have become known as 'spaghetti' and 'lasagna'—or nuclear pasta."

Given this exciting discovery, Barilla Executive Chef Lorenzo Boni decided to get creative and make his own version of nuclear pasta using Barilla Angel Hair, carrots, red bell peppers and Romano cheese. A few pieces of Barilla Collezione Orecchiette and some sprinkles of Barilla Pastina make the perfect garnish for the plate. Try it for dinner tonight—it's out of this world!

Directions:
1. Turn on the oven and set to 450 Fahrenheit.
2. Season the carrots and peppers separately with two tbs. of extra-virgin olive oil, salt and pepper.
3. Place the seasoned vegetables on a sheet pan and roast in the oven (about 20 minutes).
4. Cook pasta according to the package directions and then drain and toss with remaining olive oil and cheese.
5. Garnish with vegetables before serving.

Over 130 years of Italian passion goes into our products