Barilla America (“Barilla”) is dedicated to delivering products of excellence to customers through a supply chain that respects human rights and the dignity of human labor. To this end, Barilla has adopted a Code of Ethics and Business which requires, among other things, that Barilla employees and suppliers:

Barilla will not knowingly support or do business with suppliers that treat workers improperly or unlawfully, including, without limitation, those that engage in human trafficking, child labor, slavery or other unlawful employment practices. Barilla requires that its suppliers comply with its Code of Ethics and Business, which prohibits worker exploitation, and requires compliance with all applicable laws, including those which prohibit the use of slavery or human trafficking or other forced labor in the production of goods and services supplied to the company.

Barilla does not currently engage in or have a dedicated program designed to specifically verify that the product supply chains in which it operates do not engage in human trafficking and/or slavery. However, Barilla does engage in audits and visits to/with its direct supplier locations and maintains a close working relationship with these suppliers. Further, Barilla requires these suppliers to comply with Barilla’s Code of Ethics and Business and the requirements and obligations imposed by law, which would include the requirement to comply with the laws regarding slavery and human trafficking of the country or countries in which the supplier does business.

As noted above, employees and suppliers are expected to know, understand and abide by all laws of the countries in which Barilla does business, which includes the laws governing human trafficking and/or slavery. If any employee learns that Barilla’s Code of Ethics and Business or any other law is or may be violated, including, without limitation a supplier engaging in human trafficking and/or slavery, the employee is required to report that violation to Barilla’s management team. Any employee who does not report a violation will be subject to discipline, which may include termination of employment. Further, Barilla will quickly investigate any reports of human trafficking and slavery in the supply chain, and will take swift action against any supplier that is found to have acted improperly. Any employee that is found to have contracted with such a supplier will be subject to discipline, which may include termination, if the employee knew or should have known that the supplier was engaged in human trafficking and/or slavery. Barilla is committed to making a strong positive contribution to the societies and people served by the company and its employees. 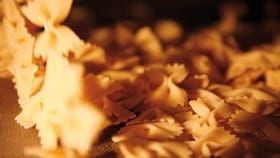